← back to “Ontogeny, Anatomy, Metabolism and Physiology of the Thyroid” 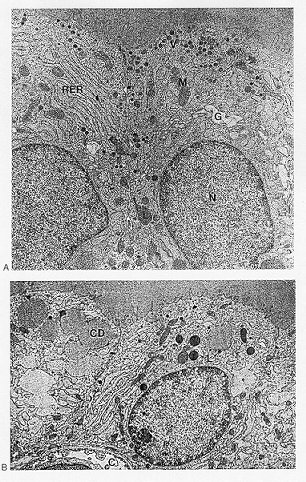 Fig. 1-6. Electron micrographs of rat thyroid. (a) Appearance after inactivation of the gland by two daily doses of T4. The micrograph shows two cell nuclei (N), well-developed rough-surfaced endoplasmic reticulum (RER), Golgi apparatus (G), mitochondria (M), lyosomes (L), and numerous dense, apical (exocytocic) vesicles (V). Because of the T4-induced TSH suppression, no colloid droplets are present (no hormone release); TG synthesis, however, is still going on, as indicated by the dense apical vesicle. (b) Appearance 20 minutes after intravenous administration of TSH (100 mU) to a rat treated with T4 for two days. The most characteristic features of these cells are the large number of colloid droplets (CD) and the almost complete disappearance of dense apical vesicles; TSH has induced an emptying of these vesicles into the follicle lumen. Other organelles are similar to those in Fig. 1-2. Note the close relation relation between colloid droplets and lysosomes (L). At the base of the follicle cells part of a blood capillary (C) is seen. (Micrographs kindly supplied by Professor Ragnar Ekholm, Goteborg, Sweden). The Golgi apparatus is located near the nucleus and consists of small vacuoles and vesicles 400-800 Å in diameter. No nucleoprotein granules are found on the surface of these vesicles. The content of the Golgi vesicles has a density similar to that of secretion droplets. 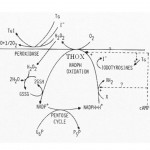 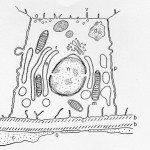