← back to “TSH Receptor Mutations and Diseases” 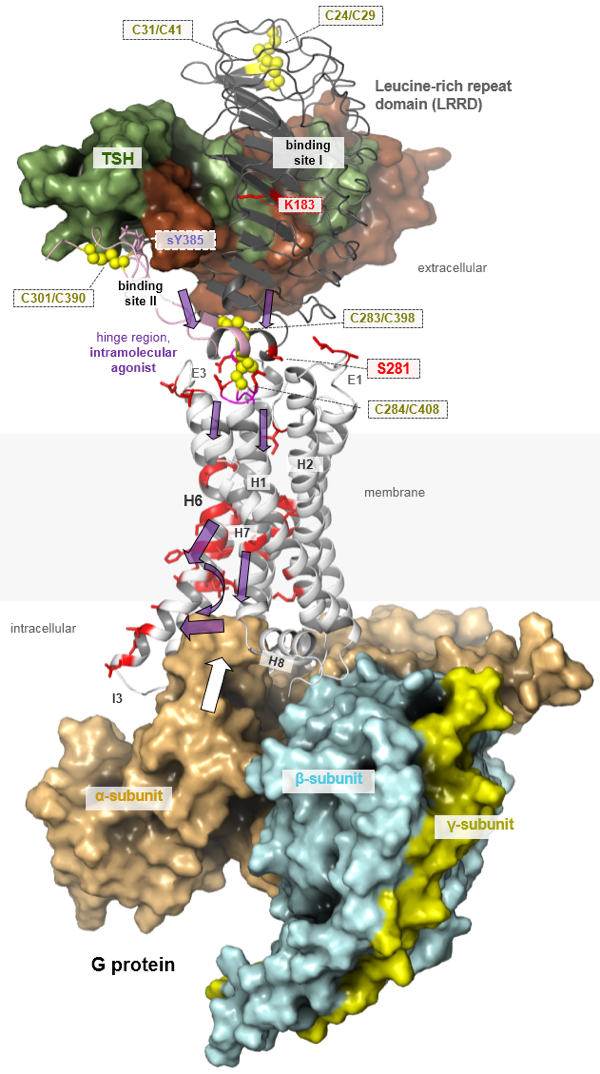 Legend to figure 3: Model of the TSHR structure in complex with TSH and G-protein and illustration of the putative activation mechanism. The receptor is displayed as a backbone cartoon in complex with the hetero-dimeric hormone and a hetero-trimeric G-protein molecule (surface representations). For the serpentine portion of the receptor, the model is based on the solved structure of the β2-adrenergic/Gs crystal (61). The ectodomain (in complex with TSH) and the hinge region were modeled based on a determined and homologous FSHR-FSH structure (82). A selection of residues affected by known activating mutations are shown as red sticks and identified by their position in the primary structure of the protein (see Figure 1). Their positions tentatively illustrate the “path” followed by the activation signal, from outside the membrane (in the ectodomain) to the cytoplasmic surface of the receptor, via the transmembrane helices. Briefly, the hormone binds to both the Leucine rich repeat domain (LRRD) and the hinge region (e.g. sulfated tyrosine 385 (sTyr)). This initial signal is transduced into a conformational change of a module (intramolecular agonist) constituted by the “hinge” region of the ectodomain and the exoloops (E1-3) of the serpentine domain. In favor of this model, several residues belonging to this module (Ser281 in the ectodomain; Asp403 and Asn406 at the ectodomain-serpentine domain border; Ile486, Ile568, Val656 in the exoloops) can activate the receptor constitutively when mutated. Together with the observation that a truncated receptor devoid of ectodomain displays significant increase in constitutive activity, this suggests that activation of the TSHR involves switching of specific extracellular portions from a tethered inverse agonist (maintenance of the basal state) to an intramolecular agonist (94). The resulting structural changes affecting the exoloops are expected to be directly conveyed to the transmembrane helices with the resulting breakage of silencing locks (arrows). From comparison of the inactive and active rhodopsin (59) or beta-2 adrenoreceptor structures (61), the largest spatial movement affects TMH6, involving a combination of horizontal and rotational (wound arrow) movements around a pivotal helix-kink at a proline (TSHR Pro639). These global changes result in the partial “opening” of the intra-helical crevice on the cytoplasmic side of the receptor (horizontal double-head arrows), allowing complete binding and activation of G-proteins. 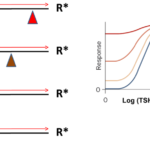 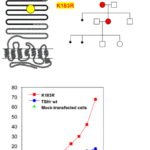